The monitoring operation method is a non-global configuration and bounded per cluster. This allows you to have two different database clusters configured with two different monitoring methods simultaneously. For example, Cluster A uses SSH sampling while Cluster B uses Prometheus agent-based setup to gather host monitoring data.

Regardless of the monitoring method chosen, database and load balancer (except HAProxy) metrics are still being sampled by CMON’s database client library agentless and store inside CMON Database for reporting (alarms, notifications, operational reports) and accurate management decision for critical operations like failover and recovery. Having said that, with agent-based monitoring, ClusterControl does not use SSH to sample host metrics which can be very excessive in some environments.

ClusterControl allows you to switch between agentless and agent-based monitoring per cluster. However, you will lose the monitoring data each time you are doing this.

For host and load balancer stats collection, ClusterControl executes this task via SSH with super-user privilege. Therefore, passwordless SSH with super-user privilege is vital, to allow ClusterControl to run the necessary commands remotely with proper escalation. With this pull approach, there are a couple of advantages as compared to the agent-based monitoring method:

However, there are also drawbacks with the agentless monitoring approach, a.k.a pull mechanism:

The above points are the reasons we introduced agent-based monitoring, as described in the next section.

With agent-based configuration, you can use a set of new dashboards that use Prometheus as the data source and give access to its flexible query language and multi-dimensional data model with time series data identified by metric name and key/value pairs. Simply said, in this configuration, ClusterControl integrates with Prometheus to retrieve the collected monitoring data and visualize them in the ClusterControl UI, just like a GUI client for Prometheus. ClusterControl also connects to the exporter via HTTP GET and POST methods to determine the process state for process management purposes. For the list of Prometheus exporters, see Monitoring Tools.

Importing external Prometheus host (which was not deployed by ClusterControl) is not supported at the moment due to the possibility of incompatible data structures exposed by Prometheus exporters.

For agent-based monitoring mode, ClusterControl requires a Prometheus server on port 9090 to be running, and all monitored nodes to be configured with at least three exporters (depending on the node’s role):

On every monitored host, ClusterControl will configure and daemonize the exporter process using a program called daemon. Thus, ClusterControl host is recommended to have an Internet connection to install necessary packages and automate the Prometheus deployment. For offline installation, the packages must be pre-downloaded into /var/cache/cmon/packages on ClusterControl node. For the list of required packages and links, please refer to /usr/share/cmon/templates/packages.conf. Apart from the Prometheus scrape process, ClusterControl also connects to the process exporter via HTTP calls directly to determine the process state of the node. No sampling via SSH is involved in this process.

With agent-based monitoring, ClusterControl depends on a working Prometheus for accurate reporting on management and monitoring data. Therefore, Prometheus and exporter processes are managed by the internal process manager thread. A non-working Prometheus will have a significant impact on the CMON process.

Since ClusterControl 1.7.3 allows multi-instance per single host (only for PostgreSQL-based clusters), ClusterControl takes a conservative approach by automatically configuring a different exporter port if there are more than one same processes to monitor to avoid port conflict by incrementing the port number for every instance. Supposed you have two ProxySQL instances deployed by ClusterControl, and you would like to monitor them both via Prometheus. ClusterControl will configure the first ProxySQL’s exporter to be running on the default port, 42004 while the second ProxySQL’s exporter port will be configured with port 42005, incremented by 1. 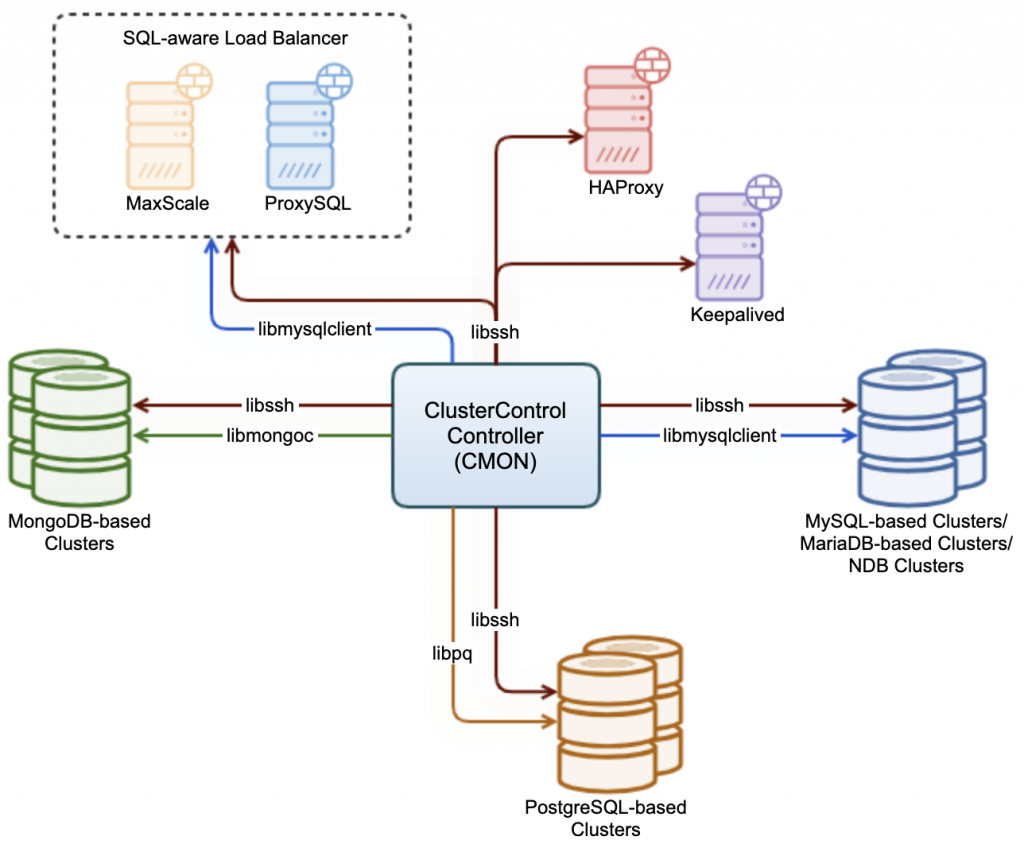 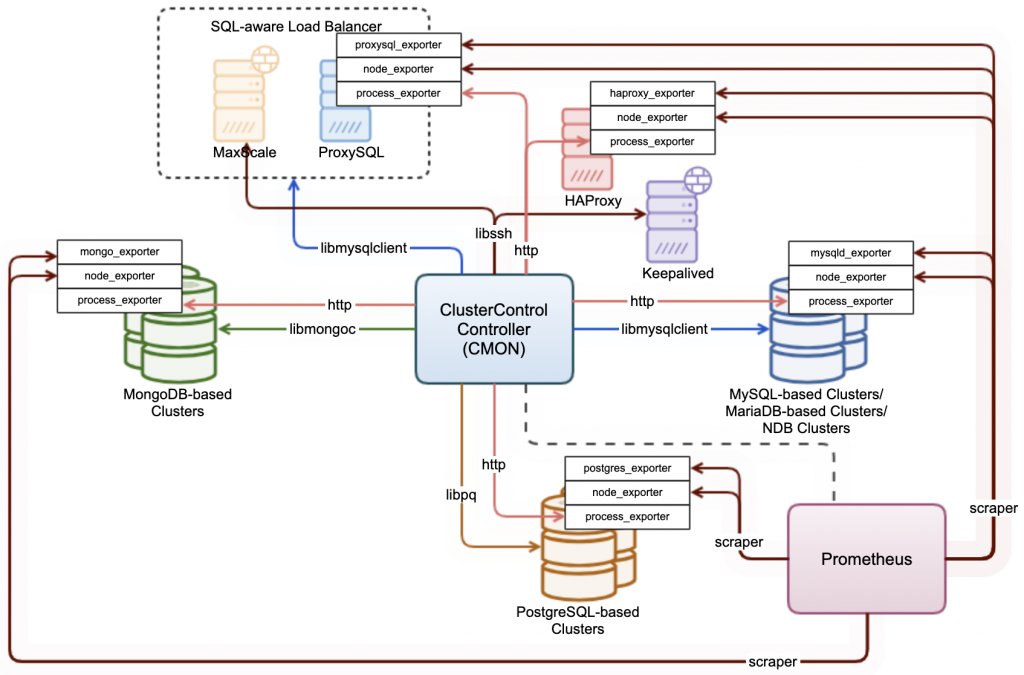 ClusterControl Controller (CMON) is a multi-threaded process. For agentless monitoring, the ClusterControl Controller sampling thread connects via SSH to each monitored host once and maintains a persistent connection (hence, no timeout) until the host drops or disconnects it when sampling host stats. It may establish more connections depending on the jobs assigned to the host since most of the management jobs run in their own thread. For example, cluster recovery runs on the recovery thread, Advisor execution runs on a cron-thread, as well as process monitoring runs on the process collector thread.

For agent-based monitoring, the Scrape Interval and Data Retention period are depending on the Prometheus settings.

The Advisors (imperative scripts), which can be created, compiled, tested, and scheduled directly from ClusterControl UI, under Manage → Developer Studio, can make use of SSH and database client libraries for monitoring, data processing, and alerting within ClusterControl domain with the following restrictions: